Surprisingly, there isn’t much difference between an oil boiler and a traditional gas boiler – and they’re not much more expensive to install either. However, there are differences in how they are run, for instance with an oil boiler you need to purchase the fuel and get it delivered to your site, as well as buying an oil storage tank to store it. 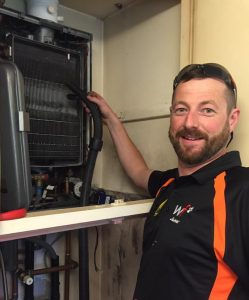 What are the advantages of oil boilers?

Oil boilers act as a viable alternative for properties that are not situated close enough to a mains gas network, but this is not the only scenario in which they are advantageous. This is because oil boilers are extremely energy efficient as they only heat water on demand, rather than having a stored backlog where energy is continuously being expended heating it up. Running costs of an oil-fired boiler are typically significantly lower than electric boilers as oil is a more efficient fuel than gas, so it gives a good return on every unit of energy that is used. Finally, oil boilers provide homeowners with greater flexibility because the homeowner has the freedom to change supplier at any time, as there no contracts in place with a mains gas supplier.

How do oil boilers work?

The principles of oil boilers and gas boilers are the same in that both use fuel to create hot water which is then distributed to the central heating system around the house to create warmth. This is done either from the mains in oil combi boilers, or from a cold water tank in a conventional system. The same hot water is also supplied to the hot water taps around the house as well as radiators and showers.

What are the differences between an oil boiler and a gas boiler?

The main difference between oil and gas boilers is the nature of the fuel used. Instead of being connected to a gas supply, with oil-fired boilers, it is connected to an oil tank where the oil supply is stored until it is needed. Heating oil also burns at a much higher temperature than natural gas, meaning your boiler will use less oil to produce as much heat as a gas boiler. As a result your oil boiler will heat up your home more quickly. Heating oil also does not produce any carbon monoxide so there’s no risk of carbon monoxide poisoning with oil boiler installations.